The Corporate Rich and the Power Elite in the Twentieth Century

How They Won, Why Liberals and Labor Lost 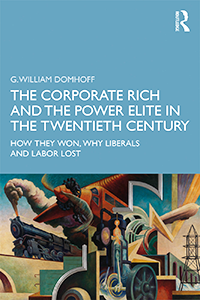 The Corporate Rich and the Power Elite in the Twentieth Century demonstrates exactly how the corporate rich developed and implemented the policies and created the government structures that allowed them to dominate the United States. The book is framed within three historical developments that have made this domination possible: the rise and fall of the union movement, the initiation and subsequent limitation of government social-benefit programs, and the postwar expansion of international trade. The book's deep exploration into the various methods the corporate rich used to centralize power corrects major empirical misunderstandings concerning all three issue-areas. Further, it explains why the three ascendant theories of power in the early twenty-first century — interest-group pluralism, organizational state theory, and historical institutionalism — cannot account for the complexity of events that established the power elite's supremacy and led to labor's fall. More generally, and convincingly, the analysis reveals how a corporate-financed policy-planning network, consisting of foundations, think tanks, and policy-discussion groups, gradually developed in the twentieth century and played a pivotal role in all three issue-areas. Filled with new archival findings and commanding detail, this book offers readers a remarkable look into the nature of power in America during the twentieth century, and provides a starting point for future in-depth analyses of corporate power in the current century.

The full text of The Corporate Rich and the Power Elite in the Twentieth Century is available as a free download here: the_corporate_rich.pdf

"Domhoff's theoretical model provides a way of understanding more clearly the entanglement of corporate power, policy-planning networks, race, class and history... and to the ways in which they continued to shape American politics in the Trump era and now under Biden." [Read the full review in New Political Science]
"Deeply engaging, this book's long section on labor exhibits excellent scholarship, displaying all the qualities we've come to expect from this author. Domhoff reorganizes and extends his earlier analysis by incorporating more recent empirical findings, new archival data, and more. The story comes to life in the historical narrative of labor's rise and decline, which offers a richness of detail and analytical coherence that makes the account both engaging and accessible to a wide readership. This book can be used in advanced undergraduate or entry-level graduate courses in political sociology (and related sociology courses on social problems, economics) and courses in other disciplines that deal centrally with politics, inequality, and American society, particularly in political science, public policy, and American culture."
"This book offers an analysis of U.S. politics and social/economic policy from the Progressive Era into the early twenty-first century, based on extensive archival and secondary sources. The book analyzes three of the more important realms of federal policy: regulation of labor unions, social benefits, and foreign relations, focusing especially on trade. It sharply contrasts an analysis of the power elite to Marxist and institutional theories, and then throughout the book specifies how the power elite analysis yields better explanations for historical change and for the particularities of US political economy than previous explanations. The book dramatically advances our understanding of the role of race, racism, and racial conflict in the making of policy in the United States, offers an historical explanation for the emergence of a divided power elite made up of corporate moderates and ultraconservatives, and identifies the mechanisms through which the elite shaped public policy. It also traces the making of labor policy, explaining why labor militancy had a limited effect due to the enduring divisions of craft and industrial workers and their unions, racism, and the usually united corporate interests. Taken together, these chapters offer the most sophisticated and accurate history of labor in the United States yet written."